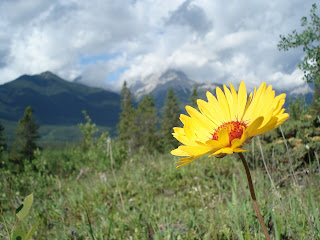 Banff, Alberta,Canada﻿
ELOHIM
God of Creation﻿
At our church Second Baptist in Houston, our pastor Dr. Ed Young began a new sermon series last week, The Names of God. The first name in the series is ELOHIM, meaning the God of Creation. It was a moving message. It was extra special that during the sermon he had his son and daughter-in-law, Cliff and Danielle Young of the contemporary Christian musical group Caedmon's Call, sing "God of Wonders"﻿ which they assisted in writing. Here is the sermon in its entirety.

This song was requested as a wake up call from NASA by Commander Rick Husband on board the Space Shuttle Columbia STS-107 just a few days before the tragedy:


Good morning...looking out the windows, you can really tell He is a God of wonders.

Amazing Pictures from Space: A Hero Comes Home: a third and final article about the amazing photos taken by Colonel Douglas Wheelock

Pictures from space: The approaching dawn... the aurora borealis... the cities awakening to a new day collide to make this masterpiece. "And, while with silent lifting mind I've trod the high untresspassed sanctity of space, put out my hand and touched the face of God." 10-26-2010. Pictures from space Photo: NASA / Douglas Wheelock

"From the rising of the sun to the place where it sets, the name of the Lord is to be praised." Psalm 113:3