Showing posts from 2013
Show all

Those pesky, blogging "watchdoggers": woof. Who let them out?

December 15, 2013
Jack Graham Tells the Church to Get "As Far Away As Possible" from Those Who Criticize the Church from FBCJax Watchdog on Vimeo . Jack Graham Explains How to Have Your Best Christmas: Shun Church Critics, Especially Those "Watchdoggers" But why would Jack Graham want to use his pulpit to tell his church members to not read blogs, to basically shun all people who criticize the church or pastors? Because it was a blogger who helped begin the process of calling Graham's church to explain why they failed to report pedophile John Langworthy to police, resulting in the pedophile moving to Mississippi where he molested more children. Amy Smith is probably one of the "bloggers" that Graham would tell people to shun and stay away from. Associated Baptist Press : World Magazine   mentioned  Prestonwood’s handling of the Langworthy affair in a cover story titled “the high cost of negligence” related to the reporting sexual abuse in churches. The a
4 comments
Read more

November 15, 2013
I alone cannot change the world, but I can cast a stone across the waters to create many ripples.  We know only too well that what we are doing is nothing more than a drop in the ocean. But if the drop were not there, the ocean would be missing something.  - Mother Teresa Speak up . Tell your story. Cast your stone across the waters. Do for one what  you wish you could do for all. And you're never ever, you're never ever going to stop, no matter what all this group [ SNAP ] is trying to do - the church staff involvement with kids, teachers' involvement with kids - you're never going to stop all of that - no matter what kind of crusade you go on. It's there. It's part of life. No. No it's not. It's a crime. Stories  at Child Help SNAP Mission Statement Our most powerful tool is the light of truth. Through our actions, we bring healing, prevention and justice Silent No More Unfortunately your browser does not support IFrames.
Post a Comment
Read more

Numbers, not souls: a culture ripe for abuse

November 06, 2013
An investigative reporter at NBC Charlotte, Stuart Watson, has done a series on the Southern Baptist megachurch, Elevation Church, and its pastor, Steven Furtick's 16,000 square foot home currently being built in North Carolina. In the most recent report , the NBC Charlotte I-team obtained a confidential Elevation report:                         Elevation is the largest megachurch in North Carolina, and one of the fastest-growing churches in the United States. The church has kept its finances secret even from donors, asking staff and some volunteers to sign a confidentiality agreement which threatens to sue them if they disclose internal numbers.  Elevation’s founding principles called “The Code” state “we are all about the numbers”, and emphasize a reliance on numbers as metrics for growth and success. In one promotional film for Elevation, congregation members identify themselves by the “number” of the order in which they joined the church.  Who R the Megachurch Le
1 comment
Read more

Sacrificing of Souls for the Sake of the Institution

October 23, 2013
Too often many in the Church are tempted to silence or disparage those who stand with children & plead that the Church do more to protect. — Boz Tchividjian (@BozT) October 9, 2013 Boz  Tchividjian recently joined Janet Mefferd on her show to discuss sexual abuse in the evangelical church. Rebuking abuse survivors often silences the deepest of pains while pushing these precious people away from Jesus in search of safety. — Boz Tchividjian (@BozT) October 22, 2013 Evangelical Sex Abuse Record 'Worse' Than Catholic, Says Billy Graham's Grandson Boz Tchividijian Last week the Associated Baptist Press reported on Paige Patterson's remarks to seminary students: There’s no room in the church for whistleblowers, a Southern Baptist seminary president said in a chapel sermon Oct. 15. Patterson goes on to say: Patterson said the reason grievances between church members wind up in court or the media is: “If I appeal to the church elders, if I appeal to the
1 comment
Read more

Not to be blind. Not to be silent.

September 03, 2013
" Powerful talk that can be applied to abuses in the Church & those that speak out." - Boz Tchividjian Freedom doesn't exist if you don't use it . I found myself in this cause, and I'll never be the same . These are people of immense persistence, an absolute determination not to be blind, not to be silent.   The really important thing about Gayla is she's ordinary. She's like you, and she's like me. She had freedom, and she was ready to use it.   Those who refuse to be 'willfully blind' in the face of evil are often accused of being troublemakers who should be ignored or ostracized. — Boz Tchividjian (@BozT) September 2, 2013 In my own personal experience of speaking up about child sex abuse in the Baptist church, beginning with Prestonwood Baptist Church and the abuse by my former minister John Langworthy, I have encountered both silence and shunning by those in positions of leadership there and among the SBC, even a pe
Post a Comment
Read more

July 17, 2013
This statement addresses the dire need for the Christian community to begin addressing the issue of sexual abuse in the Church . A Public Statement Concerning Sexual Abuse in the Church of Jesus Christ Recent allegations of sexual abuse and cover-up within a well known international ministry and subsequent public statements by several evangelical leaders have angered and distressed many, both inside and outside of the Church. These events expose the troubling reality that, far too often, the Church’s instincts are no different than from those of many other institutions, responding to such allegations by moving to protect her structures rather than her children. This is a longstanding problem in the Christian world, and we are deeply grieved by the failures of the American and global Church in responding to the issue of sexual abuse. We do not just believe we should do better; as those who claim the name of Jesus and the cause of the Gospel, we are convinced we must do bette
1 comment
Read more

July 02, 2013
You may choose to look the other way, but you can never say again that you did not know .  ~ William Wilberforce A Georgia pastor, Peter Lumpkins, authored a resolution on child abuse that was passed at the SBC annual meeting last month in Houston. A greater awareness of abuse is always a great start, but what are the practical implications of a non-binding resolution? Who will police it? Who will oversee accountability and action? What discipline will there be, if any, for churches and pastors who have failed or fail in the future to report abuse? Does Lumpkins have a blind side when it comes to cases of recorded and documented sexual abuse of children within SBC churches, not just within evangelical organizations with which the SBC has close ties, like Sovereign Grace Ministries that prompted him to write and present the resolution ? While I appreciate the gravity of the SGM lawsuit that recently and rapidly captured his attention, where has Peter been in the last few years
Post a Comment
Read more

Lookin' at you SBC ...and your resolution ...where's your moral courage in action, not just words? This is How a Real Leader Addresses Abuse Stop Baptist Predators: Another year of Baptist do-nothingness on clergy sex abuse We can fill a million books with theology and a million pews with worshipers, but it's all empty if we fail to protect & defend one child. — Zach J. Hoag (@zhoag) June 14, 2013 Brave action, not vague resolutions, stops crimes against kids Baptists adopt resolution, SNAP responds   Houston Chronicle article on Southern Baptist Convention by watchkeep “ @jackngraham : Sometimes the most spiritual thing you can do is take a nap.” Or make that critical call to Dallas police to report #abuse . — Amy Smith (@watchkeep) June 14, 2013
Post a Comment
Read more 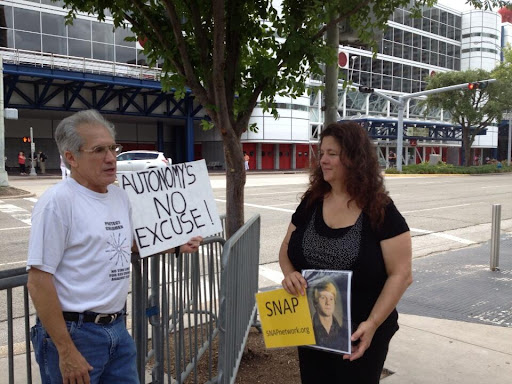 Miguel Pratts and Pam Palmer Pam being interviewed by Jeff Brumley of ABPnews Did someone from the SBC or HFBC call the Houston police department days before our plans to host this awareness event at the SBC meeting? Listen here or click to play the audio below of the voicemail I received last Friday from an officer in the Houston police department criminal intelligence division. UPDATE 6/20/13:  More about that phone call I received from the Houston police prior to our event, which as anyone can see  was not a “protest or rally” but simply an awareness/media event…with me and Pam and another survivor, Miguel Prats. I called that officer back late last week that left me the voicemail. After a several minute long conversation with me asking him questions about how he was alerted to our plans, my cell phone and David’s, I came away with more questions and an unsettled feeling. He claims to have searched for “protest” and “rally.” I never used those terms on my blo
1 comment
Read more
More posts