I am featuring an excellent comment that child protection expert Simon Bass left on my original post on Elevation Church and Norman Vigue. Simon Bass is the CEO of CCPAS, Churches’ Child Protection Advisory Service:


CCPAS is the only independent Christian charity providing professional advice, support, training and resources in all areas of safeguarding children, vulnerable adults and for those affected by abuse.

We exist to safeguard both children and vulnerable adults throughout the UK. We also work to help those who are, or have been, affected by child abuse and similar issues.

CCPAS is consulted and used by places of worship and groups across the church spectrum. We also assist other faith groups and a wide variety of statutory agencies and non-faith organisations keen to benefit from our resources and expertise.

We regularly give advice to government, Safeguarding Boards, Children's Social Care, Adult Social Services, the Police, the Probation Service, Health, voluntary bodies and other agencies across the UK.


Elevation church appear[s] in denial about Norman Vigue, so the concern has to be for the safety of all children in the church.

God is a God of the second chance, ( Luke 15:11-32) God wants us to be restored to him, but that right relationship is conditional on our willingness to repent and seek his forgiveness. God’s grace through the sacrifice of his son Jesus Christ makes a way for all who have sinned regardless of what that sin is (Ephesians 2:8).

We know that sex offenders often have multiple victims some liken it to an addition. Vigue served time for the offence of possession of child abuse images. I prefer not to use ‘child pornography’ as it can distort some peoples understanding with the word pornography. What we are talking about is not just naked pictures of children but the recording of the sexual abuse of children. This shows that Vigue has a sexual interest in children, and whilst undertaking treatment and therapy is helpful he will always remain a danger to children. He will not be helped if he is part of a church that is in denial about his crimes (calling them mistakes is a denial, suggesting that mistakes lead to miracles is just a dangerous statement, as it infers that the miracles is removing that sexual attraction to children, leading to the question how this can be tested?)
For the truly repentant sex offender there is never an issue about having any form of public ministry in the church. They will welcome a contract outlining the boundaries they must keep. This should include conduct in the church and in the wider church family. This will have been written following a risk assessment of the church (can the church safety accommodate the sex offender, or would say another church with no children’s ministry be a better church) and informed by risk assessment from law enforcement, etc. Importantly it should be recognised that the principle aim of the contract is not the integration of the sex offender into the church but the protection of children who are part of the church family. Children are trusting, particularly in churches so we must never place sex offenders in positions of trust and responsibility which tells children that they are safe to be around. Why risk sex offenders targeting children away from the church building. Children may be reluctant to talk to a stranger but show less concern talking to someone they believe is a trusted adult. We don’t judge, true repentance is demonstrated by their fruits the journey they are on (Matthew 7:16-20). Viewing child abuse images is not a victimless crime, they are thousands of victims who have not only been sexually abused but continue to be re-victimized by the sharing of those images. I have no issue with churches who welcome the modern day lepers that is sexual offenders into their community. I have issue if this is done without careful grace, and this starts with recognizing that our churches have victims of abuse within them. Let us care for survivors of abuse, have our leaders and workers trained in child protection with clear policies and procedures in child safety. Then our churches will be better equipped to care for sex offenders. Being careful as to what role you give a convicted sex offender is not about denying God’s power to work miracles and to restore the sinner. It is about enacting Galatians 6:10 in doing good to everyone as we have opportunity. Being a good steward in church is not only about finance it is about conduct. We should not place a convicted sex offender in a place of temptation. I know of no church who would give a convicted embezzler the job of the church treasurer, and our children’s welfare is more important than our finances.It is not about time scale. In what we know about grooming and how some sex offenders manipulate circumstances it is worth noting that, no sex offender is any safer because they have been part of the church for a particular period of time. Be wise as Matthew 10:16.

Last Friday, I began a Twitter conversation with Geoff Schutlz, the lead Motion Graphics Designer on staff at Elevation Church asking a question about registered child sex offender Norman Vigue who is in public leadership roles at Elevation Church.

We have heard from some concerned people that Norm has been greeting people at Elevation Church and oversees guest resources in addition to the class he leads.

Several others joined in on the Twitter conversation and for a while on Friday night, Geoff Schultz responded. In his last tweet on the matter on Friday night, he said he would read the federal criminal court documents, USA vs. Norman Vigue. The next morning I noticed that Geoff had deleted all his tweets about Norm Vigue. He had also blocked me and several others. 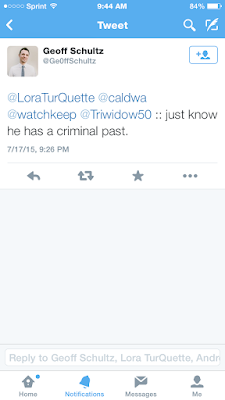 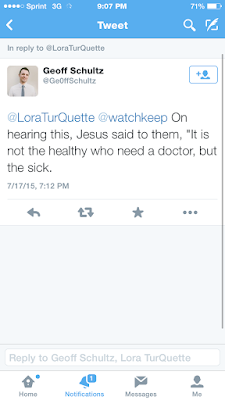 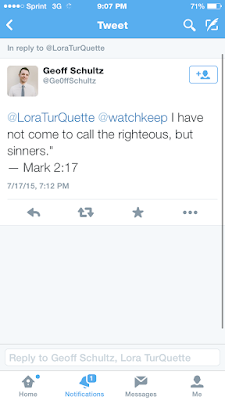 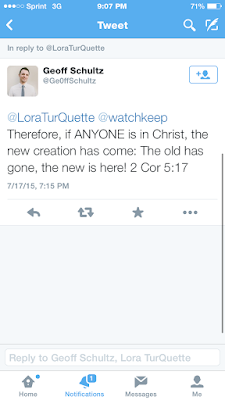 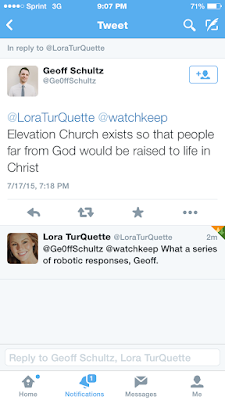 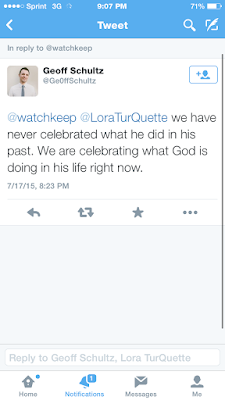 @Ge0ffSchultz @watchkeep @LoraTurQuette there is a difference between judging ones salvation vs judging the best way to keep children safe.
— RetiredHockeyMom (@Triwidow50) July 18, 2015 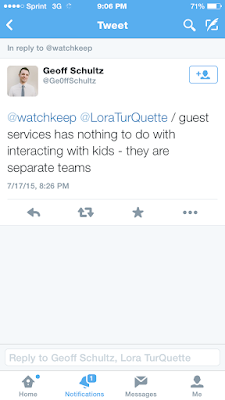 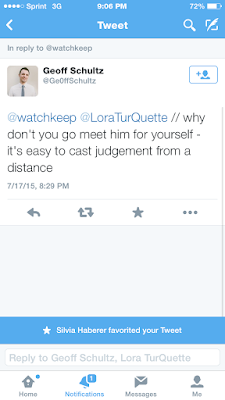 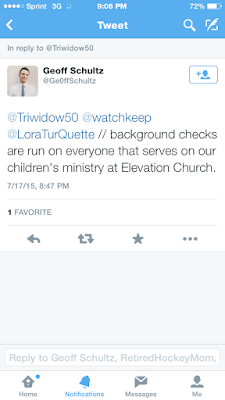 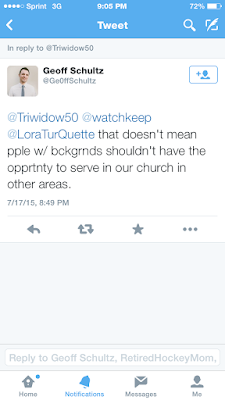 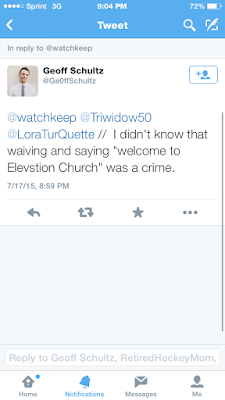 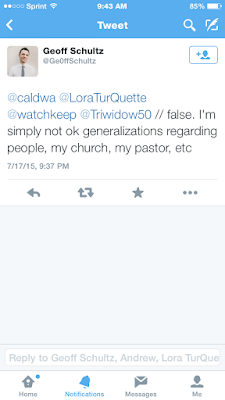 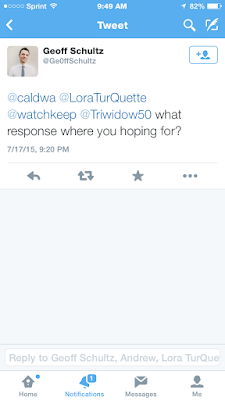 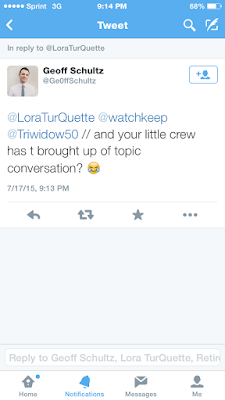 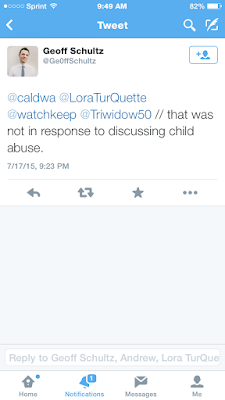 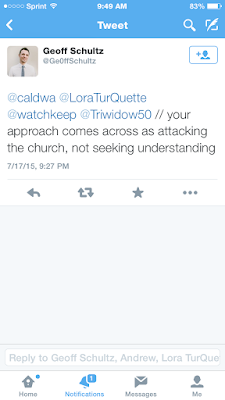 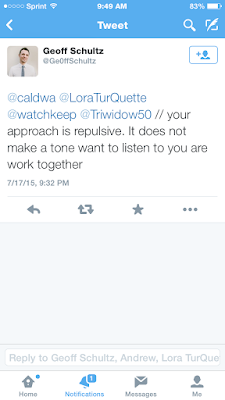 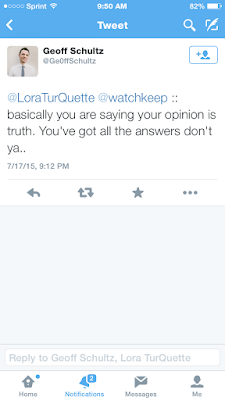 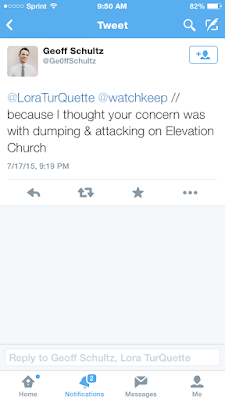 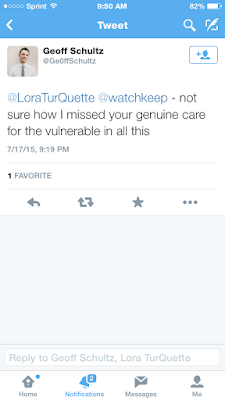 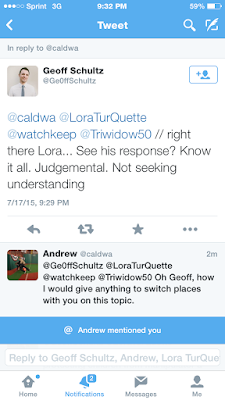 @watchkeep @GovPappy I wonder,did Furtick even have one word of comfort for the little kids exploited by men like Norm? Even a short prayer?
— Dee Parsons (@wartwatch) July 18, 2015


@wartwatch @watchkeep Well, being deeply involved in visual pedophilia is no mistake. It is a sin and a crime. Why call him a hero?
— Pastor Jason (@pastoralmusings) July 18, 2015


@watchkeep @Ge0ffSchultz I'm blocked as well. He is part of a group they will not listen to the dangerous reality of sex offenders.
— Dee Parsons (@wartwatch) July 18, 2015

@watchkeep I'm heartsick for all the kids attending/attended #elevationchurch while he's been attending as (a trusted) "hero" & leader.
— Laura (@simplyellamee) July 20, 2015


.@Ge0ffSchultz Do you really think it's a good idea to have a convicted pedophile in a church leadership position?
— Done Disciple (@EricFryHTX) July 18, 2015


@ElevationWatch @watchkeep This is an article worth discussing in light of the Norm"the hero" situation.
— Dee Parsons (@wartwatch) July 19, 2015


@wartwatch @watchkeep @Ge0ffSchultz How can staff be prepared to deal with Vigue + protect others from him if Furtick hid truth from them?
— Andrew (@caldwa) July 18, 2015


Faith communities are marketed as places where people can heal. For most CSA survivors -> untrue #elevationchurch https://t.co/RGjbcaEqtv
— Laurel (@laurelgreen) July 18, 2015


There is a difference between "judgmental" and "good judgement" #elevationchurch. Sexoffenders should not be in leadership.
— Laurel (@laurelgreen) July 18, 2015


Does loving the church sometimes mean that we have to fight the church? See new Friday Post: http://t.co/Zvs1Wducwb
— Boz Tchividjian (@BozT) July 17, 2015


“An offender’s testimony may give the impression to kids & parents that the church considers the offender to be safe.”http://t.co/fEkzr38IpK
— GRACE (@netgrace_org) July 25, 2015