According to his bio on the Meridian University staff page, Elliott Freeman graduated from the University of Oklahoma and received his Mdiv from Southeastern Baptist Theological Seminary.  He and his wife, Leslie, served as missionaries for 6 years in southeast Asia.  Elliott, Leslie and their 4 children are now members of First Baptist Church Sapulpa Oklahoma. 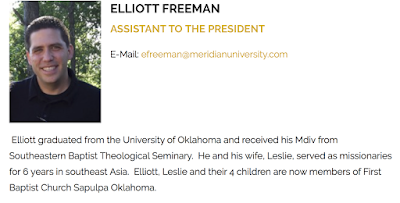 Tom Elliff served the International Mission Board, first as Senior Vice President for Spiritual Nurture and Church Relations from 2005-2009, then as President from 2011-2014. Tom served pastorates in Arkansas, Texas, Colorado and Oklahoma, and as an IMB missionary in Zimbabwe. Tom also served as president of the SBC Pastors Conference and two terms as president of the Southern Baptist Convention.

Records received by The Sapulpa Messenger show that Elliott Freeman (full name Preston Elliott Freeman) served with the IMB in Southeast Asia from September 13, 2006 to his termination dated July 6, 2012.

Elliff was originally inaugurated as IMB President in 2011. Under his tenure, in July 7, 2012, the IMB FIRED an IMB missionary serving from FBC Sapulpa.  So abrupt was his termination that his family had no time to gather their belongings.  He was perp-walked off the mission field in China and instructed that he was banned forever from serving in the IMB.  His personnel letter, which was placed into the hands of The Sapulpa Messenger, can be seen below:

The Sapulpa Messenger shared with me the email exchanges from January 2016 with the IMB and a concerned FBC Sapulpa member. The member was inquiring about Freeman's termination from the IMB and concerns that his termination was due to issues of sexual misconduct, since Freeman would be involved with kids in the church youth ministry. 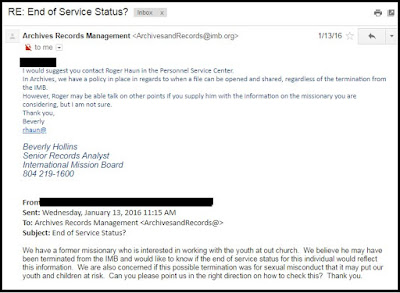 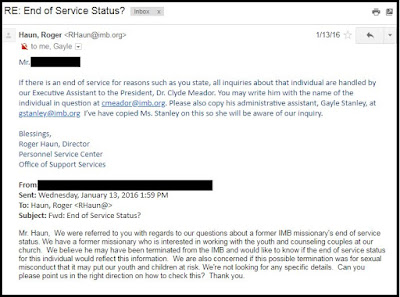 The concerned church member received a reply from Roger Haun, director of personnel at the IMB. Roger stated that "if there is an end of service for reasons such as you state, all inquiries about that individual are handled by our Executive Assistant to the President, Dr. Clyde Meador." At the time of the email exchanges, Meador was executive assistant to then and current IMB president David Platt. Clyde Meador retired from the IMB in May 2016.

The church member stated that the inquiry was for concerns that Elliott Freeman was terminated from the IMB for "sexual misconduct." Roger Haun's reply confirmed that David Platt's executive assistant Clyde Meador should handle this inquiry since it involved "end of service" for "reasons such as you state." The stated reason was "sexual misconduct."

Clyde Meador, executive assistant to IMB president David Platt, replied to the email about Elliott Freeman. He confirmed that Elliott Freeman was terminated by the IMB for "failure to maintain a lifestyle in keeping with the expectations of missionaries of the International Mission Board." He added that to "explain further the lifestyle issues, I would need a written authorization from Mr. Freeman to share that information with you."

Social media posts confirm that terminated missionary Elliott Freeman is involved with the youth ministry at FBC Sapulpa. His father Mitch Freeman is on staff at the church as the children's pastor. Did Elliott Freeman's termination due to issues of sexual misconduct involve sexual abuse of kids or vulnerable people? If so, has this been reported to law enforcement to be investigated? Did the IMB conduct another internal investigation like in the case of fired IMB missionary Mark Aderholt who was recently arrested for child sex crimes?

The student pastor at FBC Sapulpa is Keno King. 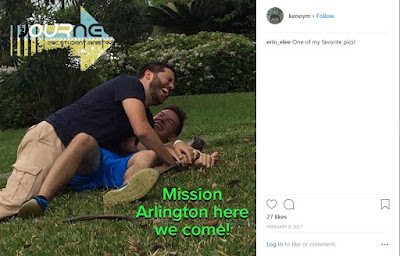 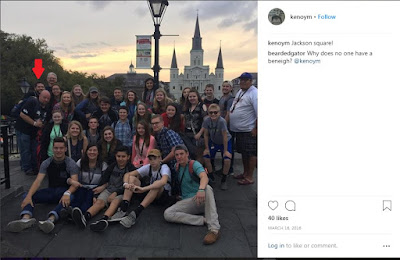 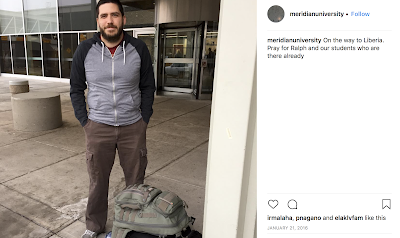 Does the @FBCSapulpa pastor know about the fired @IMB_SBC missionary working w/ youth? Is there a reason this is being allowed? Quid pro quo? Listen to him speak in this clip and decide for yourself. @watchkeep has an excellent thread on this also. #churchtoo @plattdavid #sbc18 pic.twitter.com/VgUOfDAlz8
— TheSapulpaMessenger (@SapulpaMessengr) July 29, 2018

This thread not only highlights an immediate danger to kids in Oklahoma but also reveals how difficult the process has been to get answers from @IMB_SBC and adequately warn others. @jdgreear, @plattdavid—this is one example of how urgent the need for a database is. Please help us https://t.co/HNkKZqVrqx
— Ryan Ashton (@ryanllashton) July 29, 2018

Anonymous said…
Interesting read on the response. There was no confirmation that the firing was for "sexual" misconduct. There are enough problems in the church and with the IMB that you don't need to sensationalize things like this. Have you asked Elliott? Have you requested direct information from the church? If so you don't talk about it here, you just misrepresent Mr. Haun's statement. He is saying that if a person has been "fired" as you suggest then to get the end of service documentation you would need to talk to the assistant to the President. Please find out the facts. The IMB/SBC does need to keep a record of reasons that ministers and volunteers have been fired or are no longer allowed to work with the church. But we do not need non-factual stories trying to destroy people before you know all of the facts.
Tuesday, September 04, 2018