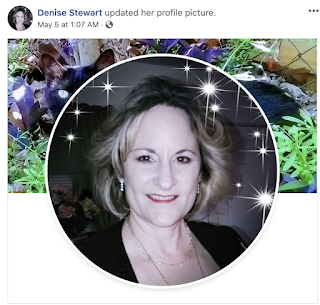 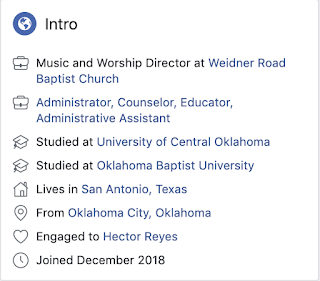 In 2012, Cynthia Denise Stewart was sentenced to six years in prison in Texas for online solicitation of a child. She texted nude photos of herself to a 15-year-old boy and spurred illicit conversations on Facebook. Stewart was a counselor at an elementary school in the Judson Independent School District in San Antonio, Texas. Stewart was ordered by state District Judge Juanita Vasquez-Gardner to register as a sex offender.

*update: since my post went up, Denise has been editing her Facebook profile. I archived it here earlier today.

Stewart, who worked at Olympia Elementary in Universal City, has been in custody since November, after parents of the boy approached authorities with printouts of their son's Facebook chats. In the online conversations, Stewart is seen telling him to delete all conversations because she could lose her job, court documents state.
Weeks after she was taken into custody, Judson trustees voted unanimously to fire her.
Under a plea agreement reached last month, Stewart pleaded no contest to online solicitation of a minor, a third-degree felony punishable by up to 10 years in prison, in exchange for prosecutors remaining silent on her application for probation.
At the defense's request, Vasquez-Gardner added later that she might “possibly” retain jurisdiction of the case, which would leave open the possibility for Stewart's early release from prison — at the judge's discretion — on shock probation in the next six months. Shock probation is a reduction in a sentence given after a person serves several months in prison to “shock” them into behaving lawfully.
Neither the teen nor his parents confronted Stewart during the hearing. But in a letter to the judge, the parents described the defendant as a child predator who used her friendship with the family and background in counseling to groom their son.
“Prior to our discovery, Cindy would often ask me about my children, specifically our 15-year-old,” the letter states. “We appreciated her concern, since she often reminded us that she is a counselor and knows how to motivate kids.”
The decision to approach law enforcement was difficult given the attention they knew the case would receive, the parents said.
“But we knew we couldn't live with her being in the school setting with children in the future,” they wrote.

Denise Stewart, according to her Facebook profile, currently works at Weidner Road Baptist Church in San Antonio, Texas as the music and worship director. Weidner Road is a member of the Southern Baptist Convention.

Anonymous said…
Where did you find documentation that this woman is involved in leadership at this church? I looked on their website. There is no listing of their staff.
Wednesday, May 08, 2019

Amy Smith said…
From her Facebook profile. Did you see the screenshot in my post?
Wednesday, May 08, 2019

Anonymous said…
I'm glad you saved her page. I needed to see that and compare it to what she has left to know that you aren;t someone with a grudge. Good job
Wednesday, May 08, 2019

Jason said…
I live in San Antonio. similar things were happening at Alamo Heights Baptist Church, and other churches which had Jorgan Hoberg.
Wednesday, July 31, 2019