October 17, 2019
Last week, I was notified, along with other advocates, that The Village Church sent out an email to members at The Village Church Fort Worth campus notifying them of an important meeting taking place on Thursday night October 10. The email stated that the matter involved the student ministry. The language used seemed to me that this was abuse disclosure. 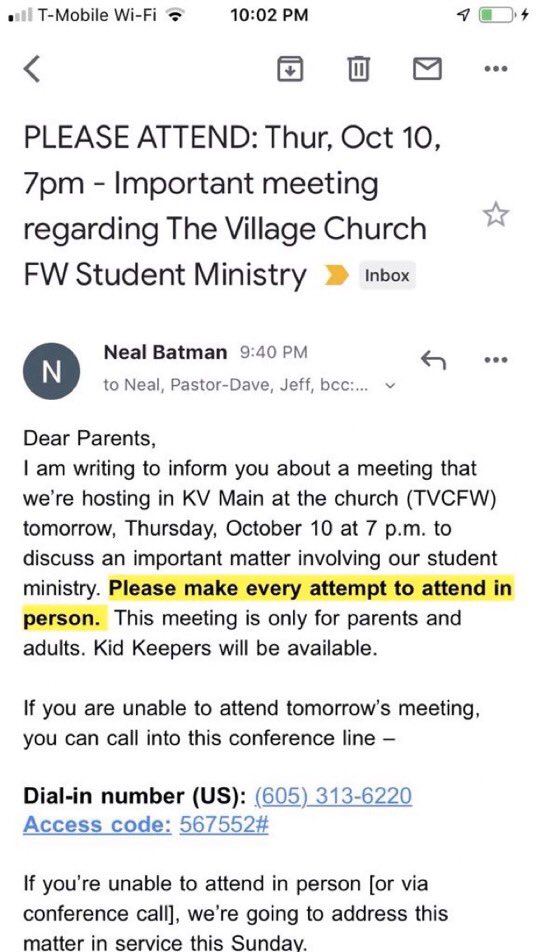 At the time of the meeting, I dialed into the announced teleconference number. A recorded message stated that the church teleconference was not available but to attend the upcoming church services on Sunday to hear the information.


On Sunday 10/13/19, according to a member who was present, the parents were informed that a children’s & youth volunteer by the name of Andy Landrum had confessed on Wednesday 10/9/19, to ‘having some inappropriate sexual contact with a child and also having tried to videotape children at his place of employment (a school). According to Mr. Landrum, no incidents occurred at The Village Church. The church immediately contacted CPS & the authorities.


Andy Landrum was a volunteer for the last few years at The Village Church in the student ministry until his confession to staff last week. Anna Keith wrote in her post that Andy volunteered particularly on Wednesday nights.  He also led a small group of junior high boys (approx ages 12-13), along with TVC staff member Neal Batman, who is the Student Minister at the Fort Worth Campus. A parent whose son attended a youth retreat at The Village Church in 2016 reached out last week to Anna about a concerning issue that came up at the time. Student Minister Neal Batman and Andy Landrum hosted a group of boys for this retreat at their home where they were living together. Andy spoke openly with the boys at this retreat/sleepover about his struggle with pornography and invited the boys to talk to him if they were experiencing the same struggle.

Andy previously wrote on his blog in 2015 about his addiction to pornography. That post has been deleted since Anna Keith wrote about it a few days ago. Only one post remains up on his blog. All posts prior to June 2019 have been removed.

Yesterday more information about Andy's confession was revealed. The emailed statement was also posted on TVC website. Notice that they now state that the confessed sexual abuse *does* involve someone from the church, contradicting their earlier assurances to parents that no one from TVC campuses was involved.


We want to make you aware of a situation regarding criminal sexual misconduct by a Fort Worth campus volunteer.

The week of October 6, Andy had several meetings with elders and pastors of TVC Fort Worth. He revealed that he has attempted and acted on sexual sins and criminal acts of voyeurism at his former place of employment, as well as with one individual who attends The Village Church Fort Worth.

Upon Andy’s confession, The Village Church promptly contacted Child Protective Services and the Fort Worth Police Department. His current and former places of employment have been notified, along with the one victim within TVC, who is being ministered to by the staff and pastors from our Fort Worth campus. As a volunteer with the Fort Worth Student Ministry, Andy attended ministry events that involved all TVC campuses, including The Village Church Denton, Northway Church, and Citizens Church.

From the beginning, we have been proactively cooperating with law enforcement officials. If anyone has information about specific criminal offenses perpetrated by Andy, we urge you to contact Detective Andrew Owen at 817-392-4361. We will make you aware if any new information comes to light, as it pertains to TVC, via an update on our website.

We desire to assist you as you process this information. We know this may be triggering or traumatizing for some individuals. If you need counseling resources, please reach out to our Director of Care, Summer Vinson Berger, who can refer you to specific places for care.

Yesterday this email was sent to Northway Church members. Notice in this email it states Andy Landrum says no TVC children involved, which we now know was untrue. pic.twitter.com/ghtdTOjNWx
— Anna Keith (@annakeith) October 16, 2019


It was reckless in my opinion to have repeated the claim of a confessed child sexual predator in a statement initially emailed to parents that there were no victims from The Village Church. It is also very concerning that only current members have received notification. One former member whose son attended a sleepover retreat with Andy Landrum stated that she did not receive an email.

There was an email sent out on Wed eve about a meeting for Th eve. A teleconference was cancelled that should have taken place. I didn’t receive an email regarding the meeting& announcement& the man being investigated. my son was in his small gp and slept at his house during camp
— thechurchlady (@TamaraChurch20) October 17, 2019


If you have any information about abuse by Andy Landrum or suspicion of abuse by Landrum or others, please make a report to police. The detective handling the Landrum case is Detective Andrew Owen at 817-392-4361 at the Fort Worth Police Department. You may also utilize the National Center for Missing and Exploited Children's cyber tipline.

TVC does not state Landrum's current place of employment or where he was employed at the time of his confessed crime at his work. I found a link that mentions his employment in 2014 at the Fort Worth Independent School District.

Apparently not serious enough to make a formal public announcement that could reach any and all minors that had contact with him as a volunteer?? Never ever a good idea to keep this type of information within the “church family”.
— Boz Tchividjian (@BozT) October 14, 2019


This should include a truthful public announcement that, 1) reaches as wide an audience as possible, including current and former attendees, and 2) doesn’t create false assurances to current parents that all is “safe” before the full truth is known. And that’s just the start..2/2
— Boz Tchividjian (@BozT) October 15, 2019