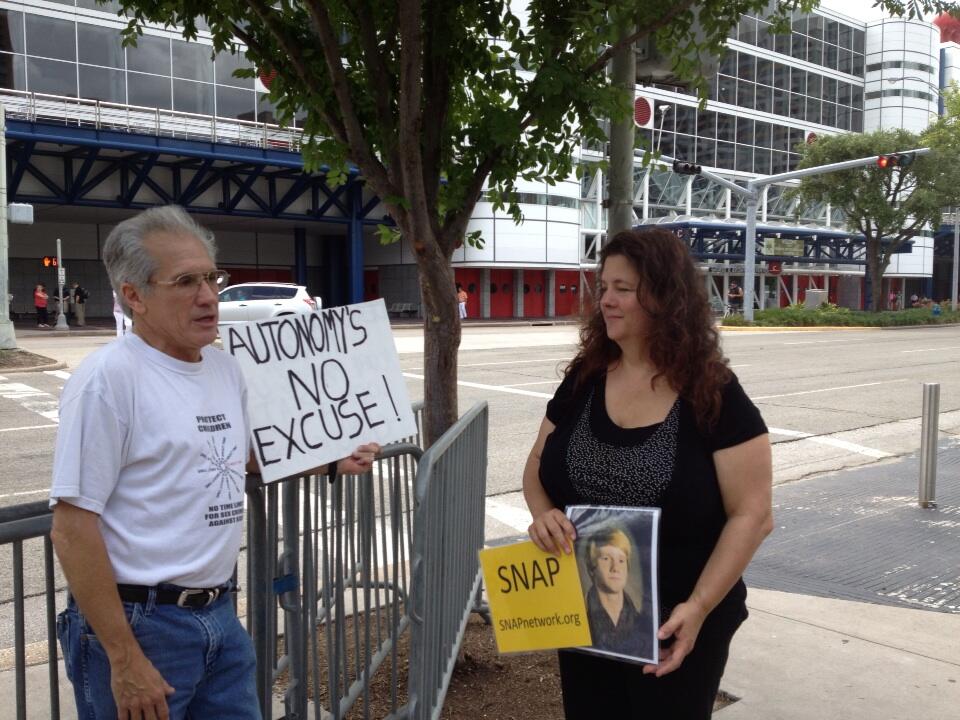 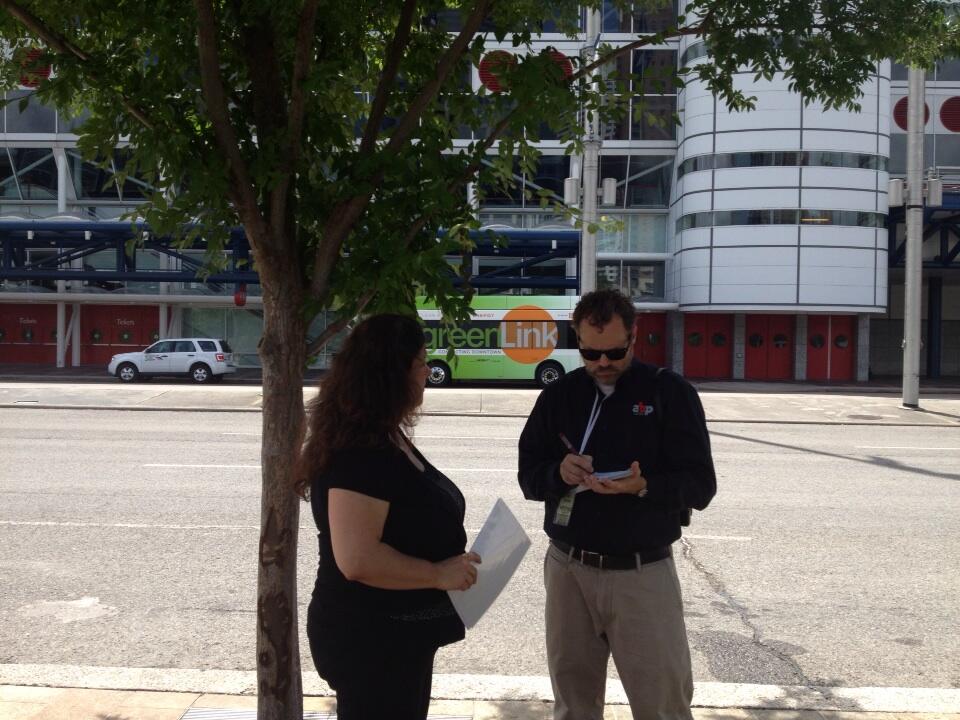 Pam being interviewed by Jeff Brumley of ABPnews 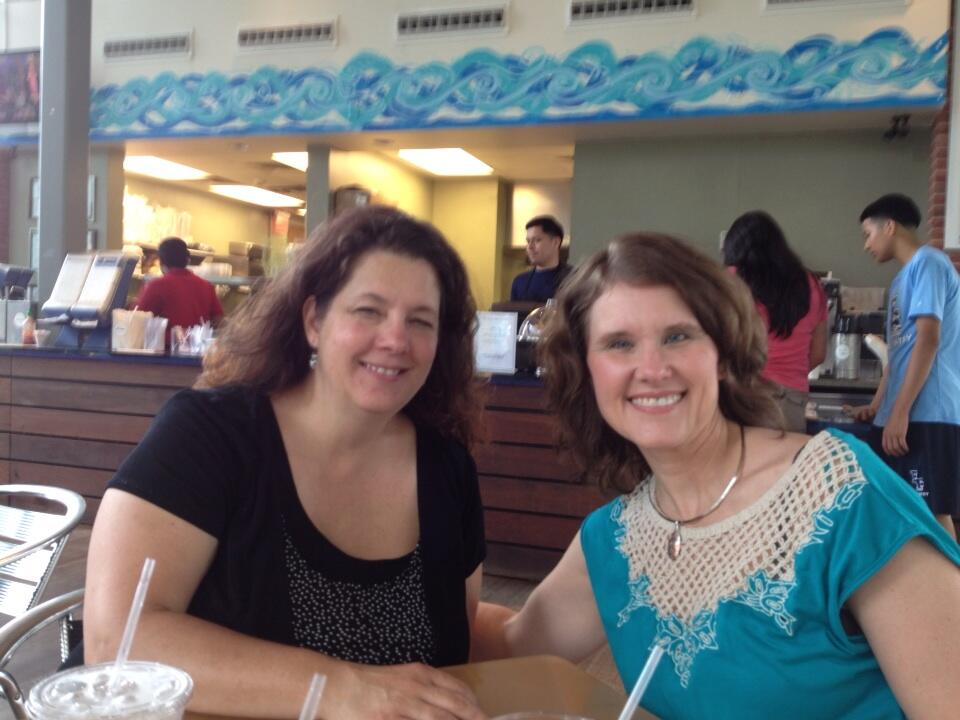 More about that phone call I received from the Houston police prior to our event, which as anyone can see  was not a “protest or rally” but simply an awareness/media event…with me and Pam and another survivor, Miguel Prats. I called that officer back late last week that left me the voicemail. After a several minute long conversation with me asking him questions about how he was alerted to our plans, my cell phone and David’s, I came away with more questions and an unsettled feeling. He claims to have searched for “protest” and “rally.” I never used those terms on my blog, only “awareness event.” I asked if he called anyone else who had “protested” the SBC and he said no, only me and David Clohessy of SNAP. I asked if he was aware that Westboro Baptist was there, and their counter protesters. He said he didn’t know they had been there outside the SBC. I said really? He seemed a bit nervous at this point, actually throughout the phone call, in my opinion. He explained that he had been off for a week. He then said that Westboro was someone else’s job, yet he had told me that his job was to “search for groups planning to protest or rally.” He did not mention my blog at all but said that he learned about me and our plans from the email that we sent out that Friday morning, June 7. We sent it to Gregg Matte, Doug Bischoff, Frank Page, Russell Moore and Fred Luter:
http://www.scribd.com/doc/146329026/Survivors-Network-of-Those-Abused-by-Priests-SNAP-Letter-to-the-SBC

At some point late that morning, SNAP posted this letter online on the SNAP website, but this officer told me he learned about us from the email we sent out. The voicemail I received from this officer came in about 11:00 am. SNAP can only recall receiving a phone call like this 3 times in its 25 year history.

@watchkeep I wish we could have done more..but I knew they would want us to focus on scout issue. Thanks for the interview.
— Mary Benton (@KPRCMaryBenton) June 11, 2013

A Georgia pastor says SBC leaders who are coddling a minister accused of covering up sexual abuse send the public a message that all Southern Baptists are soft on clergy predators.


We talked to Associated Baptist Press, KPRC, Channel 39 and I was on my way home and got a call from the Houston Spanish news station Univision 45, story here. So I went back down there and called Pam Palmer and Miguel to come back too. That reporter Pedro Rojas was so gracious and gave us a lot of time to talk, and he expressed a lot of concern about this issue as he said he has little kids. Also, a husband/wife messengers and their young boys approached us as we were being filmed and asked why we were there. We ended up having a great, several minute long conversation and he expressed his concern to see the SBC take a stand to protect kids. They are from Rochester, NY. He asked to pray with us and for us by name. He prayed that there would be voices within the SBC to speak out on behalf of protecting kids. God is good.

My prayer since I began speaking out to expose abuse within the SBC in August of 2010, when I made my first phone call to Mississippi to warn about Langworthy, former Prestonwood Baptist Church minister:


Lord Jesus, shine Your light of truth, move the mountains of silence, darkness, lies and deceit, heal the wounded, protect the vulnerable and set all the captives free.


This is no different than the Penn State issue where there was one there and nobody said a word about it and kept trying to push it under the rug. - Rev. Tim Rogers, Ebenezer Baptist Church

However, I believe it needs to be stronger. - Rev. Peter Lumpkins, Corner Stone Baptist Church


Cracks in the Celebrity-Driven Church

No doubt the Celebrity leaders are not only stunned by how these little people have spoken up, but also that their voices have been and will continue to be listened to.
To God be the glory.

New BBC Open Forum said…
Well, I guess you realize what Lumpkins' real motive was now, huh? (Hint: It had nothing to do with protecting children.)
Sunday, June 30, 2013