Showing posts from August, 2016
Show all

August 30, 2016
Pastor Davey Blackburn :: A Conversation from Fresh Life Church on Vimeo . "Every overnight success story is 20 years in the making." Pastor @daveyblackburn — freshlife (@freshlife) August 29, 2016 28:00 @daveyblackburn says he wanted 2 keep preaching @resonateindy after his wife's murder "even when he was a little bit hurt." LITTLE BIT — Amy Smith (@watchkeep) August 30, 2016 Some questions re: Davey Blackburn's conflicting statements about the morning of his wife's murder #nothingiswasted pic.twitter.com/YTVv4qfnqg — Amy Smith (@watchkeep) August 30, 2016 Thank you @daveyblackburn for letting @freshlife be strengthened and encouraged by what Jesus has done in you and sustained you through. We are behind you as you continue to run toward the roar. A photo posted by Levi Lusko (@levilusko) on Aug 29, 2016 at 4:14pm PDT about 19:40 mark @daveyblackburn says he's seeing "revival sweep across the nation&quo
8 comments
Read more 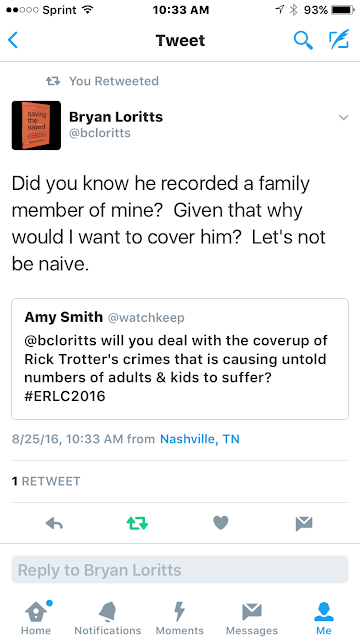 Bryan Loritts told me in a public tweet that former worship leader and Memphis Grizzlies announcer, Rick Trotter, recorded one of his family members and that they did “immediately report to police and DCS.”  Rick Trotter was  arrested  on August 9, accused of filming "upskirt" videos while women were kneeling at worship services at  Downtown Church  earlier this year.  Memphis police stated to the Commercial Appeal that no such report was made. Fellowship Memphis says that all of Trotter’s victims were adults. Then why would DCS be contacted? Oops. Not according to Lt. Karen Rudolph of the @MemphisPD @bcloritts https://t.co/PJ3eL482Z9 #ERLC2016 #RickTrotter pic.twitter.com/XhX2qOklXc — Amy Smith (@watchkeep) August 25, 2016 Statement by @bcloritts contradicts @FellowshipMem & Memphis police https://t.co/R6bJEmX2Cc #ERLC2016 #ricktrotter pic.twitter.com/rRWkKbzwc1 — Amy Smith (@watchkeep) August 26, 2016 Fellowship Memphis hires crisis mana
1 comment
Read more 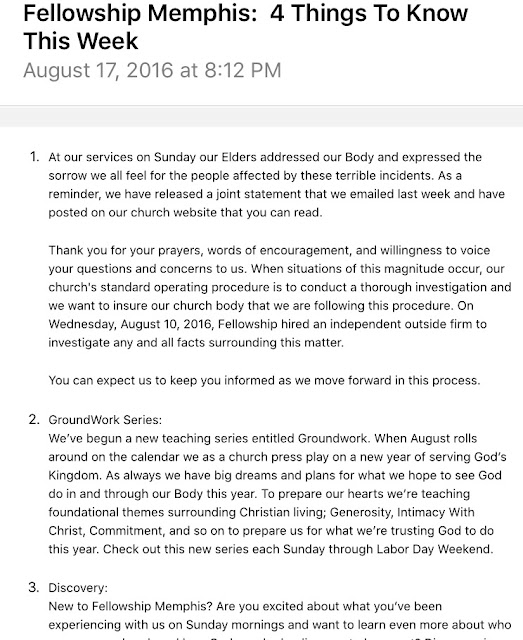 Former Memphis Grizzlies announcer Rick Trotter was arrested  on August 9, accused of filming "upskirt" videos while women were kneeling at worship services at Downtown Church earlier this year. Stotter reportedly recorded women and minors at another church, Fellowship Memphis , in 2010, where he was on staff as a worship leader from 2005-2010. After the camera was discovered at Fellowship, Stotter was fired, but church officials did not report this incident to law enforcement, according to Memphis Police Department's Lt. Karen Rudolph . Two of Trotter's alleged victims that he recorded are minors.  Everyone in Tennessee is a mandated reporter under state law .   2 of Trotter’s victims were 15 and 16 yo and @fellowshipmem church discouraged parents  from reporting to the police https://t.co/GcdN0UNavM — Amy Smith (@watchkeep) August 16, 2016 Churches tried to help Rick Trotter, but what about the women who were trespassed against? asks @DavidWatersCA
3 comments
Read more

August 01, 2016
Comment from discussion Perry Noble fired from Newspring Church? . "Dear Watch Keep, I must urge you to stay in your lane..." @thebeaubailey https://t.co/aBVi1BWooV #perrynoble #oops pic.twitter.com/ow3RFHmeyW — Amy Smith (@watchkeep) August 1, 2016 Did u forget to post an update about #perrynoble @chrisenloe ? You had something to say before yesterday morning. pic.twitter.com/FqzbZE3lMG — Amy Smith (@watchkeep) July 11, 2016
Post a Comment
Read more
More posts