Showing posts from 2019
Show all

In the weekend services at Berean Baptist Church in Minnesota, lead pastor Wes Feltner addressed the church in a pre-recorded video message (embedded below). He announced that he removed his name from consideration to be the new pastor at First Baptist Church Clarksville , Tennessee. He also stated that he is taking a leave of absence while Berean investigates allegations of his pastoral abuse. He mentioned the victims by name, Megan and JoAnna . I pulled out a few of his statements: They organized to destroy my career and reputation. My family and I are facing serious and withering attacks. There's a reason God has placed a call on my life to preach the gospel.   Feltner ends his message with an appeal to the message of "amazing grace." Megan and JoAnna have stated that this isn't the first notice that Berean has been given of Feltner's abusive behavior. Around 2014:  Berean Baptist Church, Burnsville, MN: Former Youth under Wes Feltner at First S
Post a Comment
Read more

The systemic epidemic of sexual abuse in the Southern Baptist Convention: Wes Feltner and passing the trash

17 years ago, a Southern Baptist church told two just graduated 18 year old girls to be quiet about abuse they experienced from their youth pastor. Today, another SBC Pastor Search Chairman from https://t.co/ziYSAom4ff called the women "adversaries." https://t.co/k7Zab1nW6r — Joe Donahue (@PastorJDonahue) November 4, 2019 Wes Feltner is a Southern Baptist pastor currently at Berean Baptist Church in Minnesota where he has been since 2014. He is lead pastor of Preaching and Vision.   I became aware of alleged sexual abuse by Wes Feltner yesterday upon reading the stories of two women who have come forward to tell their stories. Their abuse took place while Feltner was their youth pastor at First Southern Baptist Church in Evansville, Indiana.  Megan's story JoAnna's story   I — the victim of sexual abuse by my youth pastor, alongside another youth at the same time — apparently am the adversary of the church.... #churchtoo #metoo #AllSurvivo
1 comment
Read more

Jules Woodson - Twitter Andy Savage sexually assaulted me when I was 17 and he was my ordained youth pastor. He admits to sexually assaulting me. He admits that it was abuse of power.  Less than two years after this abuse was exposed, and he resigned from Highpoint Church, he has filed non-profit paperwork to plant a new church “Grace Valley Church.” When Andy sexually abused me, two other pastors, Larry Cotton and Steve Bradley failed to oversee Andy’s repentance, and failed to teach Andy that he had forever disqualified himself as a pastor, according to 1 Timothy 3 and Titus 2 in the Bible. I have listened to Andy Savage’s speech to the potential members of “Grace Valley Church,” which was published online. Andy Savage is using manipulative approaches and what are considered “grooming” tactics to gain interest and support for his church.  In his speech, Andy appeals to vulnerable, broken people and broken lives who are in need of the gospel; he asks for people to share their s
4 comments
Read more

October 27, 2019
Devastating news today. My abuser is back in the pulpit. 😭🤬🤮🤯 https://t.co/anu860KSJz — Jules Woodson (@juleswoodson11) October 26, 2019 I received a message yesterday from a local source in Memphis, Tennessee, that Andy Savage is starting a new church, Grace Valley Church . I was sent a link to Andy's message from an interest meeting with prospective new members.  Breaking: Andy Savage, former @hpmemphis pastor who confessed to sexual assault of a teen in his youth group in TX, is starting a new church in Memphis- Grace Valley Church. Message from his “interest meeting” https://t.co/iaGKFz5PmJ @juleswoodson11 #churchtoo #metoo — Amy Smith (@watchkeep) October 26, 2019 Andy Savage is a former pastor at Highpoint Church in Memphis who resigned in early 2018 after confessing to sexual assault of a teen girl who was a member of his youth group while he was on staff as a youth minister at a church in Texas. I wrote about Jules Woodson and her story here on
1 comment
Read more 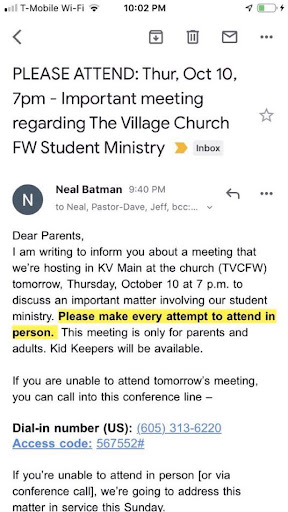 Last week, I was notified, along with other advocates, that The Village Church sent out an email to members at The Village Church Fort Worth campus notifying them of an important meeting taking place on Thursday night October 10. The email stated that the matter involved the student ministry. The language used seemed to me that this was abuse disclosure. At the time of the meeting, I dialed into the announced teleconference number. A recorded message stated that the church teleconference was not available but to attend the upcoming church services on Sunday to hear the information.  Blogger Anna Keith wrote about this case in a detailed post .  On Sunday 10/13/19, according to a member who was present, the parents were informed that a children’s & youth volunteer by the name of Andy Landrum had confessed on Wednesday 10/9/19, to ‘ having some inappropriate sexual contact with a child and also having tried to videotape children at his place of employment (a school). A
Post a Comment
Read more
More posts