A man known as a former church music leader in Texas was arrested on a fugitive from justice charge in Williamson County on Monday. Jeff Berry, 55, is behind bars on a $10 million bond. The Williamson County Sheriff’s Office booked him on a fugitive from justice charge. He’s being held for an indecency with child by contact charge, according to a sheriff’s office spokeswoman.

Court documents filed by Berry's wife in Williamson County Chancery Court accuse Jeff Berry of moving to various churches as a music leader and "molesting under-age boys over the years."

Berry also worked for World Vision in Franklin and has since been placed on administrative leave.

KTXS reported that Berry is best known in Abilene as the worship leader at Grace Bible Study in the late 1990's. Berry is accused of sexually abusing a 14 year-old-boy in 1996 while working at Pioneer Drive Baptist Church and leading worship at church camps. Pioneer Drive is a Southern Baptist Church in Abilene, Texas. Jeff helped direct Grace Bible Study for 11 years.

Earlier today while researching Jeff Berry's connections in Texas, I discovered a page with his bio as a board member for Baylor University's Center for Christian Music. This page has since been removed. 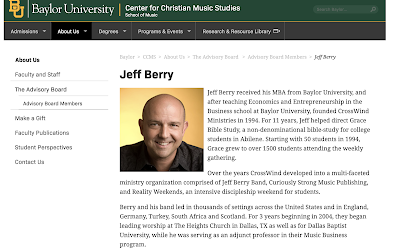 Jeff Berry received his MBA from Baylor University, and after teaching Economics and Entrepreneurship in the Business school at Baylor University, founded CrossWind Ministries in 1994. For 11 years, Jeff helped direct Grace Bible Study, a non-denominational bible-study for college students in Abilene. Starting with 50 students in 1994, Grace grew to over 1500 students attending the weekly gathering.
Over the years CrossWind developed into a multi-faceted ministry organization comprised of Jeff Berry Band, Curiously Strong Music Publishing, and Reality Weekends, an intensive discipleship weekend for students.
Berry and his band led in thousands of settings across the United States and in England, Germany, Turkey, South Africa and Scotland. For 3 years beginning in 2004, they began leading worship at The Heights Church in Dallas, TX as well as for Dallas Baptist University, while he was serving as an adjunct professor in their Music Business program.

According to his bio on the Baylor website, Jeff Berry led worship at The Heights Church in Richardson, Texas for 3 years beginning in 2004. The Heights is a Southern Baptist Church.

Jeff Berry is very well connected to leaders in evangelical and Southern Baptist circles. In a blog post, he mentions his connection to Southern Baptist megachurch pastor and Acts 29 president Matt Chandler.


Worship was always one of the key ingredients along with great teaching over the years from Steve Hardin, Matt Chandler and Luke Norsworthy.     I have so many amazing memories over the years of our worship time –  of students transparently worshiping before their creator.

After KTXS broke news of the arrest, the church emailed a letter to the congregation.
In it, Pastor Stan Allcorn called Berry a friend. He asked people not to speculate until we know all the facts and to have compassion for all involved.
Email to the congregation

On KTXS news last night it was reported that a former employee of Pioneer Drive Baptist Church, Jeff Berry, was arrested and jailed in Nashville, Tennessee, on a child sex crime. The alleged offense dates back to the mid-1990s in Abilene. Our employment records reflect that Jeff Berry was employed as a music intern at Pioneer Drive for nine months in 1985-86 and was re-hired for a similar position on September 1, 1995. He continued in this position until May, 1996.

Jeff Berry is the 55-year-old son of Pioneer Drive members, Russell and Paula Berry. We love this family deeply. Just as our church rejoices with fellow members in good times, we also stand beside them offering prayer and strength in difficult times. This is exactly what we will do for the Berrys. They represent the best of our church and we will remain by their side.

We also pray for the alleged victims. Our hearts go out to any and all who have ever been abused in this way and to their families as well. May God bring healing and peace to their minds and souls.

Jeff Berry is my friend. I love him as a Christian brother. We have served in revivals together on two occasions. I am praying earnestly for Jeff today and will continue to do so.

We do not have all the facts surrounding this situation. We do not know the full story. I would urge against speculation and for compassion toward all involved. I would also remind us that God can bring good and even victory out of the most troubling and tragic circumstances. Please join me in praying for Him to do so now.

The statement to the media said "Pioneer Drive is committed to the safety of our children and does not take these matters lightly."
Full Statement to the Media

A former employee of Pioneer Drive Baptist Church, Jeff Berry, was arrested and jailed in Nashville, Tennessee, on a child sex crime. The alleged offense dates back to the mid-1990s in Abilene. Our employment records reflect that Jeff Berry was employed as a music intern at Pioneer Drive for nine months in 1985-86 and was re-hired for a similar position on September 1, 1995. He continued in this position until May, 1996.

Pioneer Drive is committed to the safety of our children and does not take these matters lightly. Our hearts go out to any and all who have ever been abused in this way and to their families as well. We pray for God to bring healing and peace to their minds and souls.

We fully intend to cooperate with any local authority and encourage others who have information regarding this circumstance to do so as well.

The statement emailed to the church congregation illustrates why it takes so long for victims of beloved ministers, especially those with elite connections, so long to come forward if they ever do. This is a textbook church response in how to discourage other victims from coming forward to police thereby enabling an alleged child sexual predator.


See the letter embedded below from Jennifer Newton to Pastor Allcorn at Pioneer Drive Baptist Church. Her ex-husband, Jeffrey Forrest, is a former employee at the church. He was charged with two counts of aggravated sexual assault of a child in 2015. A new warrant for his arrest was issued in May 2019 as he is on the run from police.

May peace, comfort and lament be with the survivor and their loved ones. And all who are upended by this abuse.
— TKP (@RevTKP) October 15, 2019

If he was arrested then the victims are real and not alleged.
— shannon writes (@sunny_in_MN) October 15, 2019

Good lord, when the full story is out Pastor Stan it is going to be more horrific than what you are trying minimize here. Shameful.
— Larry Lynam (@scopedbylarry) October 15, 2019


“So 2019 is the year of Kintsugi for me. Golden Joinery. The repairing of brokenness for all to see, and hopefully an even more beautiful result than before.” May justice be swift and strong... https://t.co/QyB8dAJ3Nc
— Amy Smith (@watchkeep) October 15, 2019

Anonymous said…
After I read that letter online from the pastor going on record as being the good friend of the arrested musician Jeff Berry, I then went back to reading my Agatha Christie novel and the following quote jumped out at me. Of course Poirot was talking about murder, but I think it applies equally well to reports of child abuse.

“For himself, Poirot did not agree. He was a man who thought first always of justice. He was suspicious, had always been suspicious, of mercy… too much mercy, that is to say. Too much mercy, as he knew from former experience, both in Belgium and this country, often resulted in further crimes which were fatal to innocent victims who need not have been victims if justice had been put first and mercy second.” (From Halloween Party, Chapter 14)
Thursday, October 17, 2019

Anonymous said…
I'm curious as to what "proud of yourself?" is referring to.
Wednesday, February 05, 2020